“As a matter of constitutional law, the Senate is fully within its powers to let the Supreme Court die out, literally,” wrote the Cato Institute’s Ilya Shapiro in a column Wednesday titled “The Senate Should Refuse To Confirm All Of Hillary Clinton’s Judicial Nominees” on The Federalist.

This article explains that Shapiro is well-versed in constitutional issues, and his argument has a legal, if contorted, basis. Nothing in the Constitution explicitly stands in the way of senators who would be willing to destroy the nation’s highest court ― if not an entire branch of the federal government ― to stop Clinton from selecting judges who share her views.

Both Senators John McCain (http://huff.to/2faKvWY) and Ted Cruz (http://on.msnbc.com/2eTQ48u) have announced that they both intend to indefinitely continue blocking any judge proposed by President Obama or Hillary Clinton if elected.

Considering the Republican Party’s dogged refusal to negotiate or compromise on most issues over the last eight years and their nearly unwavering dedication to obstruction even when doing so is detrimental to their own constituents, it really isn’t a difficult leap to think that they’d actually be willing to kill off the one branch of our three branches of government that has the authority to declare the laws they are attempting to create (such as the religious right to discriminate and voter obstruction laws) are actually unconstitutional.

So the questions I have for you are these:

If the Supreme Court is allowed to die by attrition, what is the impact on our national political structure with the loss of the three way check and balance system between the Legislative, Judicial, and Executive branches

Is it a transition our society and/or economy could survive?

Does the willingness of one party to hold hostage and threaten to destroy a fundamental core piece of our governmental structure influence the way you had intended to vote on either the Presidential or down ballot options?

The 14th Amendment, which gave citizenship and voting rights to former slaves and their descendants, was passed in 1868.

The 19th Amendment giving women the right to vote was ratified in 1920.

Lyndon B. Johnson signed the Equal Rights Act in 1964 and the Equal Employment Opportunity Commission was created.   Now the EEOC enforces laws that prohibit discrimination based on race, color, religion, sex, national origin, disability, or age in hiring, promoting, firing, setting wages, testing, training, apprenticeship, and all other terms and conditions of employment. Race, color, sex, creed, and age are now protected classes.

In 1968, Dr. Martin Luther King Jr. was assassinated five weeks prior to my birth.

Today, these laws are being reversed with the creation of religious right to discriminate laws

The Southern Poverty Law Center (SPLC)  reports that “With only weeks left before Election Day, and Donald Trump refusing to say if he will accept the legitimacy of the vote, the radical right is warning of civil war and violence if Hillary Clinton wins. “

“Racists have fretted that the deck is stacked against Trump, and ultimately them. And after last night’s debate, the festering worry boiled over into forecasts of violence.

For most in my generation or younger, this Presidential election presents the first opportunity for us in our adult lifetimes to take a united stand against racial and gender based oppression — to send the message to everyone in this country and abroad, that the majority of our people are still striving to maintain the ideals laid out at the founding of our country for us to eventually attain — that all are created equal and all have the unalienable Rights, to Life, Liberty and the pursuit of Happiness and all the other rights granted by our Constitution and Bill of Rights.

We can say, in no uncertain terms, that we support the women and men of our nation, regardless of their nationality, ethnicity, gender, sexual orientation, sexuality, or skin color simply by showing up en masse to vote against Donald Trump and every politician at every level of government that has not openly and aggressively denounced him and his rhetoric of misogyny, racial and religious discord and calls for sedition.

We must not only make sure that he does not win this election, but that he loses by such a staggering margin that the signal is sent to all those like him that it is time for our country to take our next great step forward on the path to becoming the nation we were created to be.

One where we do not define or attain our own success by the failure and defeat of others, but instead by our combined achievements together to lift our nation and all its people higher and carry us forward into the future.

So if you know someone that is a disenfranchised voter, please share this closing thought with them:

You may not like the choices we have.   I have never wanted to vote less, nor needed to more.  But for the sake of everyone you care about now and in the future, it is imperative that we vote.   And that we vote at every level of the ballot, from National through State and County down to City elections.

If we don’t, the next oligarch dynasty to rule over the United States won’t be the Bush and Clinton families of the last 35 years, but the Trumps of the next 16 to 24.   Consider that both Donald Jr and Eric will be eligible to run by 2020, and if this election, this year, is anything but a stunning and crushing defeat, one of them will.

For our modern civil rights movement we don’t need to congregate in one state or one place to march together.   We just need to all march to our nearest polling station.   Be brave.  Be undeterred.   Send the message.   Together.

Let us not dismiss or perpetuate open confessions of sexual assault and abuse of power as common locker room banter, because it is not.

In all my years, no man has spoken thus in my presence – locker room or not – and if they had, it would not have remained unchallenged. I would not only have not participated and encouraged in the way Billy Bush did, but I would have shut it down. In a case such as this, I would have reported his statements to authorities.

If anyone thinks that increasing his fame, fortune, and legal clout will reduce his tendency to abuse what power he already has, they are sourly misguided and mistaken.

As president “The Donald” will be even worse.

And all those comparing this to Bill Clinton, consider, if Clinton’s sex scandal had occurred on the campaign trail instead of after he was elected would we have allowed him the office?

We have the opportunity now to prevent it from happening again instead of enabling it. And if we enable it, we elect him now, knowing this, we will have no recourse when he does it again because we will all have been complicit in putting a known and admitted amoral repetitive sexual predator into a position of legislative power.

The behavior of Bush and Trump in the video is not common and should not be dismissed as common. However, even if it was, I’d contend as Shaun King said that we don’t need a common man as President but an exceptional one.

Trump is only exceptional in his utter disregard for all living things that do not bear the name Donald J. Trump.

For a very important woman’s perspective I’d encourage you to read this excellent piece by Lindy West entitled “Donald And Billy On The Bus.“ 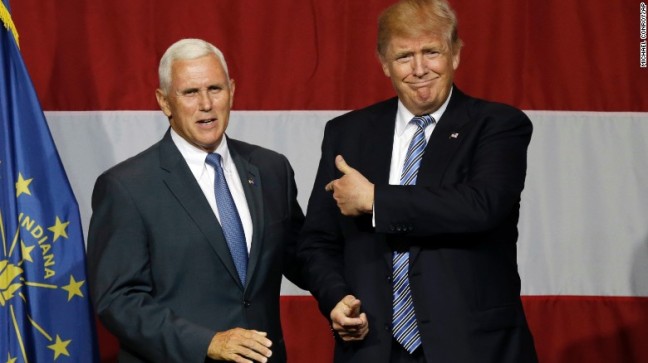 Consider the possibility for just a few moments that installing Donald Trump as President of the United States is not the specific endgame the Republican National Committee is striving to obtain.

The Republican leadership has committed themselves to the long game before, they’ve been focusing on the State and local governments for decades in order to rewrite legislation to undermine civil and Constitutional rights for protected classes of citizens and manipulate voting districts.

They’ve committed themselves to complete and total obstruction of a sitting president for two full terms, even to the determent of getting some of the concessions they have been fighting for all along by working with him as well as to the determent of the health, safety, and welfare of their own constituents.

What if they’ve decided that the best way to get the moderate Republicans to help them put a hard right evangelical conservative extremist in the office of Presidency is to reluctantly put Trump in the front runner position to appeal to use his fame and fortune to appeal to a populist base of voters easy to whip into a frenzy through manipulation of their willful ignorance to create uninformed outrage that will drive them in great numbers to the ballot boxes.   They do all this while claiming not to like his policies but supporting him because their constituents (whom they’ve already proven they about not at all) support him.

In exchange for party support during the election they put the candidate they ultimately want in the position in place as the campaign’s choice for Vice President on the ticket.   Then throughout the election cycle, that VP choice campaigns as if his running mate doesn’t exist and as if he doesn’t support the policies and positions of his own running mate himself.   Party leaders begin to slowly and reluctantly endorse their candidate while simultaneously distancing themselves from his rhetoric and condemning his behavior.

Finally, shortly after Trump is elected president, the RNC leadership that put him there unveils their plan to lead the way to impeach their own Presidential candidate, putting on a show of putting the safety and wellbeing of our nation’s above their own party line politics.

This would bring back the moderates that were driven away by Trump himself, secure their power position in the oval office with one of the most extreme right candidates to land on the ballot in decades,

In such a scenario, the end result wouldn’t be a President Trump in 2017, but a President Pence by 2018.

And in the long run, Pence would be far worse, because he is not a vacuous shell, but rather a conniving politician with a frightening social and economic agenda.