There was a moment in Trump’s 2020 State of the Union that specifically deeply bothered me as a parent concerned for the future of our nation.

I have until this point refrained from discussing it because I wanted to fully evaluate and organize my thoughts on the situation prior to putting them forth here. 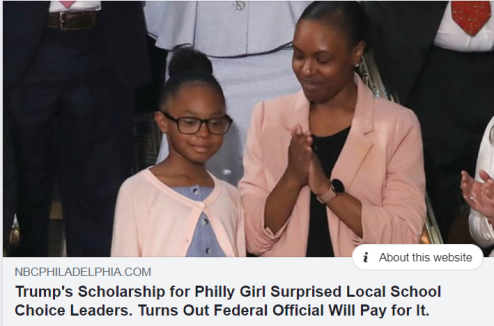 With the additional information presented in this article I have the final piece I need to give you a more informed explanation of why I took issue with it.

“Janiyah and Stephanie are in the gallery this evening,” Trump said. “But there is more to their story. Janiyah, I am pleased to inform you that your long wait is over. I can proudly announce tonight that an Opportunity Scholarship has become available, it is going to you, and you will soon be heading to the school of your choice.”

During the speech Trump used the moment to create the optics of granting a young girl of color an educational scholarship with the pretense of proving he is not racist and that the government is helping people of color, just prior to giving one of our nations most infamous and politically influential racists the Medal of Freedom.

We now know; however, that it truly was just manufactured optics and not anything to actually benefit this young woman or anyone else. That was the final piece I was missing.

Trump stood there as part of his state of the union attacking the public school system which he called “Government schools.” Instead of putting five billion dollars into the federal funding of those schools, the quality of which the government is directly responsible, he announced that they would put that money toward selectively helping certain kids opt out of the public school system for privatized schools.

They are not going to help this young girl get a quality education nor are they intending to use the selective government funding (created to undermine the governmental educational system) to pay for what they did offer her.

Instead the Secretary of Education is going to personally pay for a single year of her education after which she and her family will have to find a way to continue paying on their own or she will have to return to those underfunded “government schools.” All this, while funneling a significant portion of that aforementioned five billion dollar government program into the private school system in which DeVos is personally, privately invested.

Trump and DeVos are not offering a choice of education. They are taking direct steps to continue under-funding and devaluing public school education in order to pilfer the government funds they created under the pretense of offering a choice. In order to do so they are putting their racism on open display by using a false display of helping a youth of color with the intent of discarding her once her usefulness has been served. The end result is creating an educational system where all funding and quality is out of the reach of the masses and available only to those with the money and resources to buy their way in and the favored few they personally select to elevate and separate from the rest. They are making every effort to keep the rest of those masses they consider undesirable and unworthy under-educated so they won’t have the ability to develop the resources needed to rise up, resist, demand and force change.