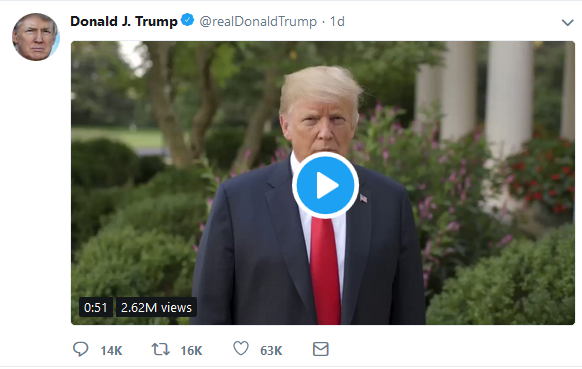 The New York Times, Robert Mueller, Paul Manafort, and Don McGahn clearly have Trump rattled to his core this weekend, and this is exacerbated by the fact that his attacks on John Brennan and laments about Alex Jones and overt White Supremacists being appropriately dealt with on social media aren’t serving as the media diversion he had hoped for.
Here is an annotated compilation of this weekend.
Saturday:
1

People putting forth hate speech on social media aren’t being censored. Their first amendment rights are not being denied. The First Amendment protects you and your ability to speak from persecution, prosecution, incarceration, exile, and execution by the government. It protects your speech from no one and nothing else. You have no right to a microphone, camera, or mass distribution platform for your hate speech.
4

Rest assured, Mueller is looking at Russia, and China, and Qatar, and Turkey, and Ukraine, and more because his mandate isn’t Russia, it’s foreign influence and obstruction of justice.
5
Most notable about this video is how uncharacteristically subdued Trump is. The prospect of actually having to deal with the consequences of his actions are clearly taking a toll on the man. The second thing that stands out is just poor the president of the United States grasps the concept of how the entire economy works after you get down past the level of corporate CEO profit.
6

Brennan no doubt made mistakes, serving the agency under the Bush administration and leading it under Obama’s administration. But he is well respected inside and outside the intelligence community by people all over the political spectrum. Once again Trump is projecting his own negative qualities (loudmouth, partisan, political hack who cannot be trusted with the secrets to our country) onto someone he views as an personal threat. This is a remarkably common ad hominem attack ploy for him.
7

Rachel is a regular Fox News contributor, her husband is Wisconsin’s Republican U.S. Representative Sean Duffy. This is exactly the relationship and type of connection he is using to justify stripping the Justice Department’s Bruce Ohr of his security clearance. But it’s a “great job” if you’re a supportive Republican and a “dire national security risk” if you’re not.
8

Here he reiterates how poorly the president of the United States grasps the concept of how the entire economy works after you get down past the level of corporate CEO profit. Just in case you missed it in his earlier video.
9
Another one minute video defense of private meetings with Kim and Putin. In which he reminds us “Nothing bad can happen…especially when your president knows what he’s doing.”
Breaking norms for treasonous intent, getting played and manipulated at every turn, these are not signs of a president who knows what he is doing. And if he does, he knows he is doing it illegally and poorly.
10

As we’ll see from Sunday’s posts, this is an indication that Trump didn’t understand the basic concept that the White House Council’s duty is the office of the president and the American people, not to the man holding the office. A concept you can actually see him become painfully aware throughout Sunday morning.
Sunday:
12

An innocent person doesn’t even consider the possibility that someone close to him might be a “Rat” because there is nothing for them to “Rat” about. Only guilty people worry about having their crimes ratted out to authorities. And as mentioned, McGahn serves the people, not the president. He’s met for over 30 hours with Mueller’s team and he’s handed over significant evidence and testimony on the obstruction of justice charges. The New York times isn’t failing, it’s thriving, it’s subscription base increases every time the President complains about them. And the article in question is well sourced and detailed.
13

Refusing to testify, attempting to discredit and fire the people investigating, attempting to eliminate the organizations that investigate governmental ethics violations, waging a propaganda war against the truth to the point that your lawyer is on TV saying “Truth isn’t Truth” while you scream about “Fake News” are not indicators of transparency.
Your persecution of the press, you’re attacks on individuals who speak out about you, your use of ICE to terrorize people of a specific ethnic background, and your security clearance hit list that doesn’t include Michael Flynn who has pleaded guilty and awaits sentencing yet retains his clearance.
14

Collusion is not the crime. Collusion is the act of planning the crimes. Conspiracy to defraud the United States, international money laundering, tax fraud, campaign finance fraud, SEC and FEC felonies, witness tampering, jury tampering, these are the crimes for which Trump can and hopefully soon will be convicted.
15

A complete repeat of the first twitter tantrum message of the day, with the same explanation. See number 12 above.
16

Another repeat of 12 and 15 above just in case you missed them already.
17

We close by circling back to number 13 above. Once again demonstrating a lack of understanding of what McCarthyism really is and how he is duplicating it, while also projecting his own worst qualities on the people he considers personal enemies.
And just for good measure, one final reference to the “Witch Hunt” that is devastating his coven with over 100 indictments of over 32 individuals and companies that has already accumulated over half a dozen convictions and guilty pleas and testimony bargains.

2 thoughts on “Under Pressure!”