On Sunday December 4th, the Army Corps of Engineers, under the direction of President Obama called a halt to the current construction of the Dakota Access Pipeline.project, and ordered a study to find alternative routes for the pipeline that do not run through the Sioux Nation lands.

This is a major win for grassroots activism and for the Sioux people, but we must remember it is a temporary victory.   We must ensure that the new route is a safe route and doesn’t just threaten another group of people that cannot or  will not defend themselves as diligently as the people of the Sioux nation or Bismark before them.  We must ensure that as soon as our attention is diverted, the President-Elect who is financially invested in the company laying the line doesn’t just direct it to pick right back up where it left off.  We must not allow a temporary victory to allow us to become complacent again.

In the meantime, there are some lessons we need to take away from the last several months as these events played out.   I’ll cover them here in no particular order of importance because they are all important. 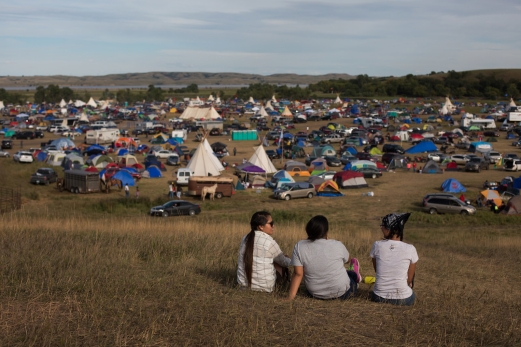 First:     No matter how much help and assistance was sent, there was no way the protest would have succeeded long enough without the protestors enduring perseverance and commitment to their cause.   As activist allies came and went, they remained, despite the weather and everything the government and the pipeline construction company had to through at them.

The lesson here, is that protest for major reform isn’t going to happen in a one day march, if we want to affect change, we’re going to have to be willing to commit to the the long haul, especially against opponents with virtually unlimited time and resources to use against us.

Without the local community involved and supporting these types of movements cannot succeed. 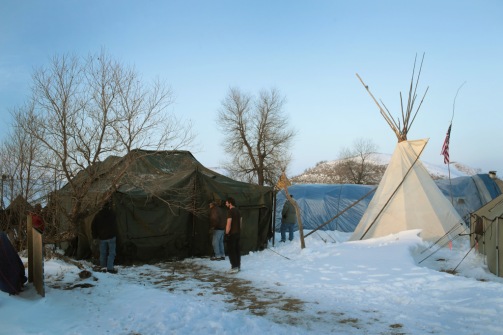 Second:     For the first time in history, a large contingent of American military veterans came to the conclusion that their oath to defend the both the Constitution and our people against all enemies both Foreign and Domestic required them to answer a call to stand with these people against our own government.

They showed up and began building winter barracks to protect the protestors from the worst of the Dakota winter weather conditions and committed to stand with and in front of the protestors to protect them from armed and brutal retaliation as they defended their land and rights.   Their presence, and the press coverage generated by them, was no doubt a significant factor in the timing of the ordered halt. 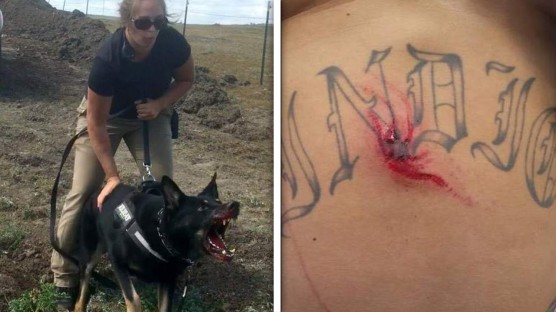 Third:    The corporate conglomerate had no problem resorting to violence against these people, early on in the protest, which lasted well over half a year.  More than once they released attack trained guard dogs against the protesters.

They even went so far to have a DAPL security agent disguise himself as a protester, drive into the protest camp and fire several shots from his rifle in the direction of the workers in hopes of creating an returning volley from the local law enforcement.  He then torched his truck in an effort to hide the fact that it was an official company vehicle that did not belong to the protesters.

Fourth:    Unlike the Veterans mentioned earlier, both the Federal and State governments, especially various police forces forgot that they’re job is to protect, serve, and defend the people, not massive corporations attempting to run roughshod over the people.

As a result, police agencies from states all over the country invoked emergency support laws and raided their FEMA disaster funds to send militarized troops to attack the people in an attempt to forcibly drive them from their own land.

In 1996, then-President Bill Clinton signed the Emergency Management Assistance Compact (EMAC). The statute was created in response to Hurricane Andrew, which wrought an estimated $25 billion in damages when it hit Louisiana and Florida in 1992, necessitating large-scale, interstate relief coordination. EMAC, an agreement eventually entered into by all 50 states, allows for states to share resources and coordinate emergency personnel in case of a crisis. The good-neighbor style law was invoked for disaster relief for Hurricane Sandy in 2012 and, more recently, Hurricane Matthew in 2016.

Governors have almost always employed EMAC in the wake of natural disasters, but the bill contains a stipulation that makes it applicable during other types of emergencies including “community disorders, insurgency, or enemy attack.” On August 19, when North Dakota Governor Jack Dalrymple declared a state of emergency at Standing Rock, he relied on this language to issue an EMAC request.

Standing Rock is one of the few times that EMAC has been called upon to respond to social activism.

Those officers eventually resorted to the use of both tear gas, stun grenades, and  water cannons and in below freezing night time temperatures, causing serious harm to many of the peaceful protesters.

Fifth:     The corporate media outlets maintained as close to a near total blackout on the distribution of any news pertaining to the protests and the violent response to them by officials as possible.  Maybe it was because they were too busy reporting on what each other were saying and focusing on a candidate so vacuous that they aired 30 minutes of an empty podium on all them major networks and nobody seemed to care.   Some believe this was due to the desire to retain their oil industry advertising dollars, while others have raised different concerns.

The limited media coverage, and the biased, inaccurate reporting included in what coverage the Dakota Access Pipeline has received in mainstream media is a microcosm of the endless denigration Native Americans suffer. The New York Times, Guardian, The Daily Beast and some other print outlets have provided ongoing coverage. However, the lack of an on-the-ground presence from major TV media outlets at Standing Rock is a result of CNN and most of the mainstream media’s lazy preference for propagating false narratives based on secondhand sources.

Sixth:     Social media usage easily overcame the lack of corporate media coverage of the events.  Protesters made adept use of Twitter, Facebook, YouTube,  GoFundMe, and Amazon Wish Lists to get information out to the people of the nation regarding their need for protest, their goals, what assistance they could use, and what they had to endure.   This ability to bypass the media blackout would prove to be — aside from their perseverance — the most important key to their success.

Seventh:    Allies fighting for social justice from all over the nation came together.  Many traveled to the sight to join the protests even if they could only stay a short time, but more importantly a tremendous number of people sent food, medical supplies, camping gear and equipment, and money to support their needs and legal fees as they continued their efforts.   Without these people banding together from all over the nation and around the world it would have been infinitely more difficult for the protesters to remain in place for as long as was needed to ensure success.

Eighth:    After centuries of broken promises and broken treaties and a year of government condoned attacks by security guards and police, the Sioux nation released a “Thank you” statement to the people and the government in which they spoke of hope and peace and continued cooperation for common goals.    In that one statement they offered more hope, more grace, and more class than our country’s government has ever offered them.

In Summary, there is much we can learn from this, the most important combination being that for these protests to be successful in bringing change, we need to encourage non-violent protest with long term commitment, led by local communities, and receiving long distance support from all of us who cannot get there to stand together but want to help.